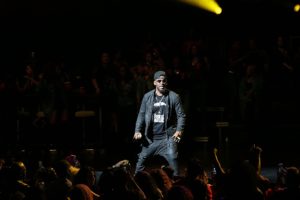 The Lifetime docu-series “Surviving R. Kelly,” which chronicles decades of the singer’s alleged sexual misconduct, has sparked debate, including among celebrities.

The six-part documentary that debuted Thursday night contains more than 50 interviews. It features testimony from women who accuse Kelly of mental, physical and sexual abuse, as well as interviews with associates and relatives of the singer, including his brothers Carey and Bruce Kelly. Tarana Burke, the founder of the #MeToo movement, and singer John Legend also provided commentary.

Kelly, 51, has consistently denied the allegations against him.

Legend, the only male musician to appear in “Surviving R. Kelly,” took to Twitter to respond to the praise he received for agreeing to take part in the docuseries.

“To everyone telling me how courageous I am for appearing in the doc, it didn’t feel risky at all,” he said in a tweet, adding that it was an “easy decision.”

In 2008, Kelly, was found not guilty of child pornography charges in connection with a sex tape that appeared to show him having sex with an under-age female and urinating in her mouth. The jury decided they could not be sure of the identity of the girl on the tape, who did not testify. He has not been charged in connection with any other allegation of sexual abuse.

The musician, whose real name is Robert Kelly, was accused of holding six women in a sex cult against their free will in 2017, which he has denied.

Special Note: Not Just Talk Radio, does not support the be behavior Rober Kelly/R Kelly!