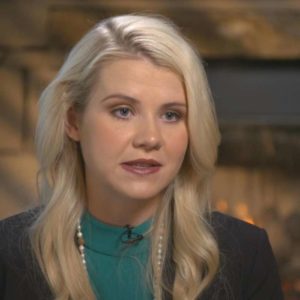 Elizabeth Smart is opening up about why she believes Wanda Barzee, one of her kidnappers who is set to be released, is still a danger to the public. Smart was rescued in 2003 after being abducted and held in captivity for nine months.

Barzee and her husband, Brian David Mitchell, were convicted for their roles in the kidnapping. Barzee, now 72, will walk free Wednesday after Utah officials determined they miscalculated her prison sentence.
In an interview you’ll see only on “CBS This Morning,” Smart tells Gayle King why she thinks Barzee should not be released. The now 30-year-old also makes some startling claims about what Barzee has been doing in prison, assertions that CBS News has been unable to confirm.

GAYLE KING: Do you feel stressed knowing that she’s about to be released?
ELIZABETH SMART: It’s been a rollercoaster. It’s been a rollercoaster of emotion, of worry, of wondering what’s going to happen… But I think at the end of it, what I’ve just come to… is that I really have spent the last 15 years of my life trying to move forward and trying to follow my mom’s advice that she gave me the day after I was rescued, in –Photo Gallery by USA Today
KING: What was that?
SMART: – in not allowing these people to steal any more of my life away from me… But am I concerned? Yeah, I am very concerned – for the community, for the public, as much as I am for myself.
KING: In the beginning, did you think that she would help you? Did you ever think, “Well at least there’s– there is a woman here”? Did you feel safety on some level with her, ever?
SMART: When he kidnapped me and was taking me up into the mountains, I remember thinking, “This is it,” he’s just going to rape and kill me. And then at one point he did end up telling me that he had a wife that was waiting. … That moment did give me a little bit of comfort. … But as soon as I saw her, I did not have that hope anymore.
KING: Why?
SMART: I don’t know, just the feeling that kind of radiated from her. It just was dark. And it was evil. And I just knew that she — she wasn’t there to help me, that she wasn’t there to protect me.
KING: You’ve written about this and talked about it, that you were raped, really, that very first night and then several times after that. Did you even know what was happening to you at 14 years old? Did you even know what that was?
SMART: That first morning when he brought me into the camp and told me I was now his wife and kept telling me it was time to consummate our marriage, I just — at first, I didn’t know what he meant. And then I remember having this idea come to my mind of what he could mean. And I remember thinking, “There’s no way.” … And I was raped. And, I was raped every day after that, multiple times a day.

KING: Every day multiple times a day? Every time I think about that, I — I can’t. It’s a miracle you didn’t have a baby, that you didn’t have a baby.
SMART: I was a little girl. I had not hit puberty yet.
KING: When you say you think that she’s a danger, what do you mean by that? Dangerous how?
SMART: Well, I know what she was capable of before she was incarcerated.
KING: So what do you think she would do?
SMART: I don’t know. And perhaps that’s what worries me, because I know just how bad she really can be. She would encourage him to rape me. She would sit right next to me. Like, the side of her body would be touching me. Like —
KING: While he’s raping you?
SMART: While he was raping me. I mean, she was right there. So, I mean, she — there were no secrets. She knew what was going on. And, I mean, she just was the kind of woman that — she was just evil and twisted. … And I remember — remember when they used to force me to — to drink alcohol. And one time they had me drink so much — I was a 14-year-old girl, I’d never touched alcohol in my life — that I ended up throwing up and then passing out in it. And both of them just let me lie there all night. And when I woke up the next morning, I mean, my face and my hair were completely crusted to the ground. And they both laughed. She laughed. She laughed just as much as he did, if not more.
KING: We haven’t heard anything about the conditions of her release. Have you?
SMART: I don’t know all the conditions of her release, but I have been reassured multiple times that she will be kept a very close eye on. And as soon as she messes up, which I’ve been reassured that she will, she will be taken back to federal prison for the duration of the five years. KING: You said you’ve been reassured that people are gonna be on top of her. Are you comfortable with that?
SMART: I have been informed on who the agent is, who the federal agent is, who will be supervising her. And I do believe that he will do the job to the best of his ability. I have faith in him. I just lack faith in her.